There is a HUGE Surf weekend event happening this weekend
All the details are listed below but if you don’t want to read all that boring text you can just check out the poster here:
https://surfguitar101.com/hosted/SG101convention2.jpg

If you have questions please contact Jeff at:
bigtikidude (at) yahoo (dot) com

a Swap Meet of surf music (cds, lp’s 45s -new used), and instrument/gear
shirts, posters, hats etc. if you have surf swag/merch to sell bring it, grab a free table and sell away.
Major Vendors will be.
Double Crown Records,
Dionysus Records,
Golly Gee Records
Gomez Amplification
Huntington Beach International Surfing Museum
John Blair with his re-issue of The 80’s album Stampede on CDw bonus trx
Machturtle Productions, and many surf bands cds.
plus many other bands members will be there selling their cds.
and there will be 1 table with Tiki magazine and other tiki related stuff
if you get tired of the Surf stuff.

**but Please save enough Money for the Night show, and their Merch. they need money too, as some of them are coming from The Mid West and
Nor. Cal.

and multi media presentations,
Dominic Priore’s Assistant Brian from the Dumb Angel Gazette and Surf Pop Culture Books, will have some of their books and mags.showing surf music clips from the 60’s and a slide show of historic pictures.
and Possibly have the Original Surfaris Sufari LP for sale.(Lmited qtys)

There will be a short trailer of the ‘Sound of Surf’ music documentary that is in production now, and they may be doing interviews at this event for the film.

Paul Johnson will be having the premier of the Pounding Surf! DVD
plus historic stories and footage from the 60’s surf scene.
plus all of the different cds he has for sale.

ALSO just added a short 4 song Eliminators set,
4 songs of Eddie Bertrand with the Eliminators,
and a 30 min Slacktone set.

Surf Jam/ (sign up list to join will be posted soon)many songs,
you play a Standard along with a Live backing band
here is the Link to the Tread with the list of songs to choose to play with Outterwave.
this list will be close soon, so join in now.
https://surfguitar101.com/forums/topic/6038/?page=1#81631

and get together/meet and greet

I am still talking to people about coming to it, and being involved.
But I wanted to Officially announce when it will be.

Later that night.
The Madeira from Mid west, Pollo Del Mar from Nor. Cal., Insect Surfers and Detonators are playing 8 pm till Midnight.

also
On Sun. Aug 3rd at the Huntington Beach Pier, 11 am to 5 pm will be.
The Fabulous Nomads, The Relix, Aquasonics from Colorado, Pollo Del Mar,
The Madeira , and The Surftones, Feat. Matt Q from Reventlos, and Kerry Chester ex of DD’s 80s band.

I Figured it would be best to announce it asap, as I know the sooner the better, for arranging for airfare and sleeping and car accommodations.

There is also a San Diego show with Pollo Del Mar,Madeira,Secret Samurai, and Zombie Surf Camp, on the Fri. nite. Aug 1st. If anybody would like to go down there to get an early st

Having a Cool Drink at Wassermusik 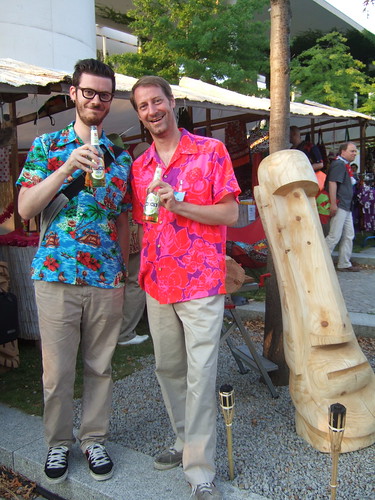 Virani, Kawentzmann and a wooden Moai from Bavaria.

Here’s a great find, Rock Hudson checking out the linernotes to Dominic Frontiere’s Pagan Festival LP, while resting in Doris Day’s lap on the set of Pillow Talk.

Search for Doris Day and Rock Hudson at www.mptv.net/. Yesterday was a little calmer, starting with Coconami (I somehow missed snapping a picture of them, sorry!) who used to be in the Tiki Tiki Bambooos, a Surf band from Munich, they now are a Ukulele duo, with mostly female vocals. This has to remind me of Petty Booka, if just by the sound of two ukes and japanese ladies singing. Maybe a smaller venue would benefit their delicate presentation more, but on the other hand Wassermusik successfully aims at presenting a wide range of music styles.

Lushy – the most contemporary sounding act in the Tiki series of events at least, if not the entire set of Wassermusik events. It’s hard to compare Seattle and Berlin for me. However I can say that there is an artificial element, not unlike in the B-52s for example. Like a yellow plastic Tiki mask at Trader Vic’s, they stuck out of the set of Wassermusik performers by having said cartoonish lounge approach coupled with some electronics. I think this could be a really groovy thing, but probably working best with a dancing party crowd in a small club. I Belli di Waikiki must be one of the busiest acts in europe in the Hula-Rock’n’Roll field, o.k. there aren’t that many, but I heard they play a lot outside their native Italy. I always enjoy the good time music and fun presentation. It’s been a smart move to pick-up the fifties connection of Polynesia and Rock’n’Roll, as so many aging Rockabillys join the Tiki afficionados. I must say that I really dig their style and especially the sound of the steel guitar and the Dearmond/Bigsby Tele – he practically nails my ideal guitar sound with it! They had given some accomplished pin-striper a go on their ukulele and guitar, looks very neat.

Don Tiki – probably the best show this side of Esquivel in Vegas! Unfortunately my phone camera couldn’t capture the fury of the dancers, the drama of the performers or the wealth of customes and make up. It was the biggest crowd at Wassermusik so far – and I like to think they witnessed something to tell their grandchildren about.

Along with seeing and hearing Waitiki and Latin Lovers it was great meeting Virani, Jochen and Tanja Hirschfeld, Forbidden Paradise’ Hai Kai and Michael. It made me really happy to hear that the first part of Armchairtravelling in the World of Tiki DVD will be available later this year. I enjoyed seeing the work in progress on the big screen, especially interested how the pictures work with the music, I had the pleasure to record for it. It’s going to be a definitive must have for Tiki-philes. …once it’s actually available. This band was opening the Tiki weekend at Wassermusik 08. The horn heavy line-up was proof to the theory that many ways lead to Exotica.

The Mayor of Exotica in Sumo dress

He didn’t quite look as big wearing his stage suit. An Exotica flute heavy weight if there ever was one!

Accomplished performances by all musicians, beautiful arrangements and cheerful stage presence – it was a great experience seeing them. Thanks! Oh, and the birdcalls by Lopaka Colon – so great and all done while providing perfect groove in polyrythmic bongo-playing. Several people noted to me that we were listening actually to Augie Colon’s son. Playing again today with Don Tiki. Monday, July 21st from 7 – 10 pm PST
Aloha!!! Strike brings yet another spectacular Exotica special to the Kitsch Niche! 3 hours of luscious, undulating, mysterious music from the Pacific rim. They’ll be lots of favorites along with plenty of rarities, too (like unheard Tiki Room music)!

Be sure to tune in right at 7:00 as Strike has concocted an Exotic cocktail of an intro unlike anything you have ever heard!

And, Strike will be announcing the winner of the Arthur Lyman 9 cd set courtesy of Collector’s Choice Music. Each CD contains 2 amazing Arthur Lyman albums!

There’s still time to enter to win. All you have to do is donate $5 or more anytime between now and 6:00 pm Monday, July 21st. Go to www.luxuriamusic.com for more details. Aloha!!

I had written a nice text about how I was introduced to The New Dimensions in the 80s. But I lost it trying out the new “Press This” feature of this blog software. It boiled down to the essence that any surf music fan worth his salt has to know this great teenage band from 1962.

The band never had any singles released. We worked with these hustler types by the name of Robert Hafner and Tony Hilder. They had a deal with a tiny budget label called Sutton to issue the New Dimension albums as ‘rack jobs.’ Essentially that meant their records would be pressed on cheap vinyl normally reserved for placemats, packaged in fairly generic sleeves, and shipped directly to the cut out bins with no hope of promotion, airplay, or royalties. We had three studio albums, ‘Surf ‘N Bongos’, ‘Soul’, and ‘Deuces & Eights’. We were part of a live album from the Santa Monica surf fair titled ‘Shake! Shout and Soul!’