The Most Alien-Looking Place on Earth

Here are the masters to what would have been the Reluctant Aquanauts second album “Aquanauts Can’t Swim”. All the songs are original except for Fistful of Dullards and Altered State Trooper which were given to us by Denis from the Treblemakers.

Pop Surf Culture with
The Boardwalkers

They’ll be playing between 6 p.m. and 9 p.m. at Stories for a book event based around my new one with Brian Chidester, ‘Pop Surf Culture: Music, Design, Film and Fashion from the Bohemian Surf Boom.’ 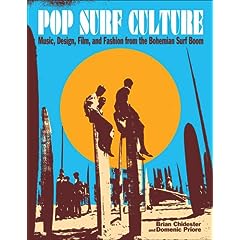 Several television monitors around the shop will be screening a wide variety of pre-1970 surfing movies as background eye candy (and for Pop effect) as The Boardwalkers play, and we meet, greet and sign books.

For more information and a ton of groovy pics, check:
dumbangelmag.blogspot.com
Comments on the blog site, very much appreciated. No one previous has presented The Rendezvous like this. Thanks, folk, and hope to see you @ Stories… If you can think of more interesting Surf related links, please use the comment feature to add them. Thanks!

Update:
I got it today, but could only read bits here and there so far.
My favorite quote currently is Johnny Bartlett saying:
“See, a lot of surf bands (in recent years) got it so wrong. It’s not just the guitar you use, or the sound you get, or the clothes you wear… it’s the whole package.”

I encourage anyone with an interest in Surf to buy it asap. It’s just epic.

Pop Surf Culture: Music, Design, Film, and Fashion from the Bohemian Surf Boom: Brian Chidester, Domenic Priore
This is going to be a must have book – just trust me. If you’ve read previous publications by the authors (like the latest Dumb Angel Magazine for example), you know they get deep into their subjects and have great sense for entertaining writing. They take you right there, with coolest people – connecting all the dots of southern california youth culture of the sixties.

for your pre-order. I am Amazon affiliated, which just means by using this link for a purchase you get a great book and support this blog at the same, for the same money. Why give it all to Amazon ;–?

The Surf Coasters are on tour from Japan and are appearing live with Slacktone this Saturday, September 13, 10 pm.
The Surf Coasters have been amazing audiences all over the States on this tour.
Plus, Slacktone is one of the best bands around.
Both bands are only rarely seen in a venue as intimate as
the Purple Orchid Tiki Lounge. Admission will be limited , so get there early!
$10 cover
21+ only!
Check out these links about the show
Tiki Central link
YouTube link
Surfguitar 101 link
Purple Orchid link

the scintillating and groovy lineup will be-
*8pm -The Barbarellatones
See Dave play lead guitar as ‘Malibu Davida ‘ in this glam-y femme-y Cramps-y gothabilly band!

*11pm – Raw Power Rangers
See Dave make a nut of himself as Iggy Pop in our tribute to The Stooges’ 1973 “Raw Power’ album ! See punkrock legend Don Bolles of the Germs wallop the drums!

AND—
KXLU’s Reverend Dan (Music for Nimrods) will be DJ!!!
Stormy Byrd will be parked out front with his red nitro dragster ‘Revelation’!
Maybe Ms. Fractal will be fire-dancing on the patio!

There is a HUGE Surf weekend event happening this weekend
All the details are listed below but if you don’t want to read all that boring text you can just check out the poster here:
https://surfguitar101.com/hosted/SG101convention2.jpg

If you have questions please contact Jeff at:
bigtikidude (at) yahoo (dot) com

a Swap Meet of surf music (cds, lp’s 45s -new used), and instrument/gear
shirts, posters, hats etc. if you have surf swag/merch to sell bring it, grab a free table and sell away.
Major Vendors will be.
Double Crown Records,
Dionysus Records,
Golly Gee Records
Gomez Amplification
Huntington Beach International Surfing Museum
John Blair with his re-issue of The 80’s album Stampede on CDw bonus trx
Machturtle Productions, and many surf bands cds.
plus many other bands members will be there selling their cds.
and there will be 1 table with Tiki magazine and other tiki related stuff
if you get tired of the Surf stuff.

**but Please save enough Money for the Night show, and their Merch. they need money too, as some of them are coming from The Mid West and
Nor. Cal.

and multi media presentations,
Dominic Priore’s Assistant Brian from the Dumb Angel Gazette and Surf Pop Culture Books, will have some of their books and mags.showing surf music clips from the 60’s and a slide show of historic pictures.
and Possibly have the Original Surfaris Sufari LP for sale.(Lmited qtys)

There will be a short trailer of the ‘Sound of Surf’ music documentary that is in production now, and they may be doing interviews at this event for the film.

Paul Johnson will be having the premier of the Pounding Surf! DVD
plus historic stories and footage from the 60’s surf scene.
plus all of the different cds he has for sale.

ALSO just added a short 4 song Eliminators set,
4 songs of Eddie Bertrand with the Eliminators,
and a 30 min Slacktone set.

Surf Jam/ (sign up list to join will be posted soon)many songs,
you play a Standard along with a Live backing band
here is the Link to the Tread with the list of songs to choose to play with Outterwave.
this list will be close soon, so join in now.
https://surfguitar101.com/forums/topic/6038/?page=1#81631

and get together/meet and greet

I am still talking to people about coming to it, and being involved.
But I wanted to Officially announce when it will be.

Later that night.
The Madeira from Mid west, Pollo Del Mar from Nor. Cal., Insect Surfers and Detonators are playing 8 pm till Midnight.

also
On Sun. Aug 3rd at the Huntington Beach Pier, 11 am to 5 pm will be.
The Fabulous Nomads, The Relix, Aquasonics from Colorado, Pollo Del Mar,
The Madeira , and The Surftones, Feat. Matt Q from Reventlos, and Kerry Chester ex of DD’s 80s band.

I Figured it would be best to announce it asap, as I know the sooner the better, for arranging for airfare and sleeping and car accommodations.

There is also a San Diego show with Pollo Del Mar,Madeira,Secret Samurai, and Zombie Surf Camp, on the Fri. nite. Aug 1st. If anybody would like to go down there to get an early st

I really enjoyed Boom Pam. The Klezmer influence has been displayed by Meshugga Beach Party from San Francisco, but they don’t have a tuba like Boom Pam has! A very enjoyable set, really, really good players, too.

I’ve seen the Bambi Molesters a couple of years ago when they still toured and had the other bassplayer. You can’t escape the dense atmosphere they create and have a really great guitar sound while doing so. They choose fitting covers and have written many beautiful originals. I don’t recall them playing so much on the edge of distortion like yesterday. The albums sure sounded cleaner, but it worked well with the audience the way they did it now.