No, You’re Not Tripping On Peyote, Plastic Made From Cactus Exists

Neil Fujita: The Man Behind the Look and Feel of Jazz

and The Beach Boys debut album shot at Paradise Cover

Twelve years to save Earth? Make that 18 months…

Why ocean acidification could make some geoengineering schemes irrelevant

The problem with Pimm’s: my search for the perfect summer cocktail

Concrete: the most destructive material on Earth

Skateboarding, not surfing, should be California’s official state sport

Sonny & Cher go to The Haunted House Nightclub in Hollywood

Asia-Pacific Survey: A third of coral reefs entangled with plastic 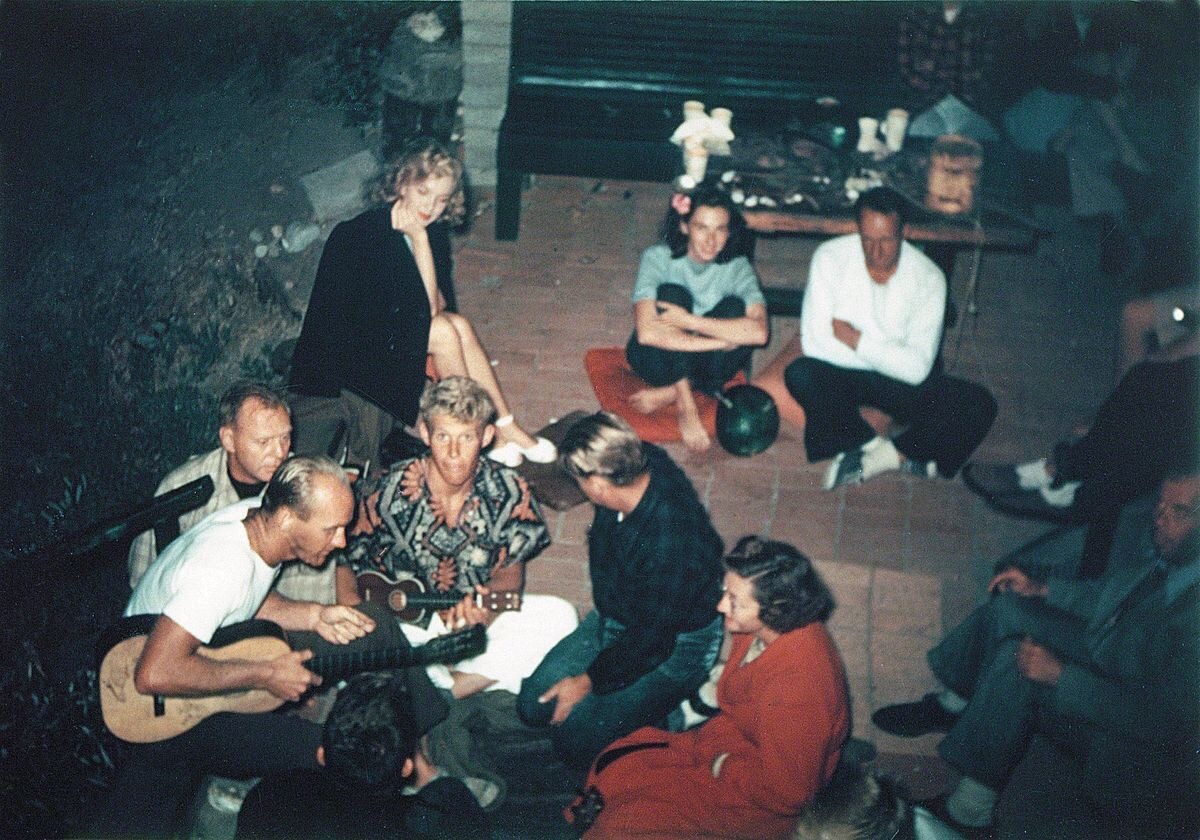 Rare photo of a young Marilyn Monroe at a surfer party in Malibu, circa 1947—the stuff The Beach Boys were singing about in their early years.

Half-Empty Bottle Of Malibu Found In Woods Behind School

When I came across this little bit of info on a new documentary about surf culture related movies, I thought I’d pass it along to Domenic Priore. He is a renowned pop culture historian, specialized and based in Southern California. I didn’t think that much sending the link, but when I read his reply, the conflicting views became obvious to me in an instant. Having read his recent book Pop Surf Culture I had already a good idea about the strong “bohemian” element in 20th century surfing culture, quite the opposite of today’s dominant “jock” (competitive, corporate, surfer risking his neck for Pepsi) – kind of thing.

KK: Hi Domenic, do you know about this?

DP: No, Kahuna, thanks for the tip. It sounds really stupid, like, the opposite of what Pop Surf Culture has to say about the whole thing. It’s hilarious that “real surfers” have yet to outlive the beach movie stereotype they disdain, despite the years of vitriol they have aimed in William “I Love Lucy” Asher’s direction. Jocks don’t have a concept who The Pyramids are, put it that way, but will celebrate a republican like John Milius, who, in Big Wednesday, made a big deal about, well, his being pissed off that a health food restaurant replaced a hamburger stand in Malibu. God forbid they allow a different point of view to exist from their jock trip, sorry, but it pisses me off, again, because, I grew up having to read in SURFER about how “Surfers are blonde haired and blue eyed, those beach movies had ITALIANS playing surfers!” as if that was some kind of big problem. At the same time, I grew up observing “surfers” having gang fights with “cholos” who could care less, but these “surfers” were really just racist American white kids that had it in for Mexican-Americans, or the more activist Chicano movement as well. I’m not a fan of Frankie Avalon all that much (another family values creep) but he was, for the most part, a really good comedian in those movies, and surpassed his own singing career a few times singing Brian Wilson/Gary Usher/Roger Christian songs such as “Runnin’ Wild,” which is cool and actual rock ‘n’ roll… unlike Frankie’s own recording career. I get big, ironic laughs out of Avalon stuff like “These Are the Good Times” as well, though, I mean, what don’t these jocks understand about COMEDY?… especially MUSICAL COMEDY? Morey Amsterdam, Don Rickles, Buddy Hackett, Timothy Carey, Buster Keaton fer chrissakes, again, what’s the problem? We hear nothing but put-downs from “real surfers” with money to burn and a forum… never mind the evident enjoyment of less professional people who surf without NASCAR-style sponsorship. Besides, Big Wednesday is not even close to the coolness of Ride the Wild Surf in any way, shape or form. There. Can you please pass this email on to Greg MacGillivray, whose own surfing movies I pretty much love?

KK: With surfing as a topic of motion pictures I think it’s a field where the fact is always head and shoulders above the fiction. Avalon or Big Wednesday – it doesn‘t matter. And, I can only speak for Europe, here these films practically had no impact on pop culture, let alone the surfers. Yet the scene bears lot’s of similarity to America, from what I gather. Which can only mean that magazines and documentaries where the true forces in shaping the surfers’ representation through the years. People recall seeing Crystal Voyager. I saw a yellow surfboard attached to the van of a neighbor hippie son, as he came back from Morrocco in the late 70s, a little later I picked up a styrofoam bellyboard from their trash. The first german surfers on the island of Sylt had John Severson movies screen to the lifeguard car (horse carriage kind, instead of towers) on the beach in the 1960s and listened to The Astronauts and Beach Boys. My impression is that the jock thing only started here after windsurfing started to be too jock dominated and the cool guys just left it to them. Unfortunately the jocks followed faster than you can say thruster. I will attach a link to a home-movie of a trip to Mazatlan, with music that was obviously dubbed on at the actual time. Listen for the jumps in the music when the footage is re-spliced. It’s a great selection of surf tunes!

I added some links to Domenic’s pure text replys, I hope he doesn’t mind.

Only $10 could win you a balsawood Malibu shape or shortboard. Well spent money, helping with the Australian bushfires. Quote from Riley Surfboards Facebook page:

The victims of the deadly bushfires in Australia need assistance and support as soon as possible. Therefore Riley Balsawood Surfboards has teamed up with the Association of Surfing Professionals (ASP) and United Links to lend their support and raise funds for the victims of the Victoria bushfires.
Funds will be raised by holding a raffle where the first prize is an Australian made Riley balsawood surfboard signed by the 2009 top 44 WCT surfers and past surfing world champions (this is an inestimable prize). Further prizes include Australian made, 100% organic cotton t-shirts and shaping DVD’s. All proceeds of the raffle will go directly to the 2009 Victorian Bushfire Fund which was launched by the Red Cross in partnership with premier John Brumby and the federal government of Victoria. The fund assists the individuals and communities affected by the horrendous fires.
Raffle tickets can be purchased on www.balsasurfboardsriley.com for $10 each. Additionally, for every Riley organic t-shirt sold until March 26th $10 are donated to the fund and the customer automatically enters the raffle. The raffle drawing will be held on 26.03.09 at 12 pm and the winner will be contacted via email and phone and will be announced on the website. The prizes will be sent anywhere around the world courtesy of United Links.